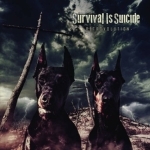 The second album by SURVIVAL IS SUICIDE caused some confusion, which is not necessarily a bad thing. But this time it’s just too confusing. Starting with the odd band name. Maybe all fitting names for Metal bands are taken by now, but that is one of the most strange monickers I came across for several years. Then take a look at the cover. Two dogs. Can you remember a similar cover? Pretty strange. It took me a long time to figure it out, but with a hint from another review I got it. Those two dogs remind me of Zeus and Apollo, the Dobermans of Jonathan Higgins in the TV serial "Magnum". But let’s proceed to the music. First disappointment: two tracks are keyboard only tracks, not serving as intro and outro but appearing at position four and six (seven tracks in total), destroying the flow and atmosphere. Maybe this was done on purpose, who knows. Discounting these two tracks half an hour of music is left. Although the band describes their style as experimental it is the contrary. The Death Metal riffs are antiquated and have been around approximately since early 90s, which is about more than twenty years by now. There is a huge MORBID ANGEL influence, especially albums like "Blessed Are The Sick" and "Covenant" served as blueprint. Generally spoken that would fit for some enjoyable moments, but remember, SURVIVAL IS SUICIDE consider themselves experimental so they picked not only a grotesque name and cover but added keyboards / synthesizer. Sadly without any sense, destroying the anyway middle-ranged songs. If you are still interested: www.facebook.com/survivalissuicide