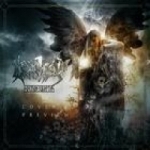 If a band decides to incorporate Folk influences into their music, that usually signals that the band in question is more or less a total Folk Metal band, brutality and darkness chucked out the window for often cringe-worthy cheesiness. Now in fairness my experience with Folk Metal is limited (for a reason) so when I say all Folk Metal is cheesy I’m speaking from a limited experience. Indeed, TAAKE’s new album has folksy parts, and many a Black Metal band (DISSECTION, to name one of the best) adapted Folk melodies to their music with great success. I would say Ukraine’s SVYATOGOR followed suit, but only barely. Any more Folk melodies and this album would sound like something FINNTROLL threw out. As it is, the balance between total Folk Metal and Black Metal maintains itself throughout the entire album. Songs such as ‘Work Hard. Eat. Watch’ display a bluesy BLACK SABBATH influence which helps cement everything together, causing the album to sound seamless in its construction and not some ill-conceived attempt at eclecticism. On its own the Black Metal influences aren’t much to speak of. It’s a good thing SVYATOGOR don’t rely solely on the Black Metal style, which can be one dimensional and dull. If left to that one element I think this would be a mediocre album at best. But thankfully that is not the case. Anyone would do well to give this album a try. It’s pleasantly surprising. SVYATOGOR have taken two styles which, on their own, can be suffocating, i.e. boring, and blended them into a stimulating album well worth the time to listen to. www.myspace.com/svyatogorband, www.svarga.eu