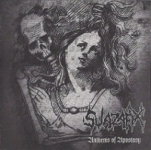 SWAZAFIX is not a name many will recognize, unless someone out there is old enough to remember the name from an underground fanzine. For the rest of us, however, SWAZAFIX is a fresh dose of old school Death Metal from the Netherlands. The two demos collected on this compilation, the 1991 and 1992 demos, show a talented and atmospheric band. You might notice the vocals sound an awful lot like ASPHYX. That’s because Theo Loomans, who unfortunately passed away in 1998, sang and played guitar on both SWAZAFIX demos. Songs such as ‘Burdened Sufferance’ show his great talent. But unlike ASPHYX, this band’s style centers less on hybridizing Death Metal with Doom influences and instead plows ahead with more of a Thrash influence. The result is a sometimes chaotic (in a good way), atonal riffing style best exemplified by song such as ‘Lifelong Imprisonment’. Then there are songs like ‘Insanianc’, where a generous part of the song is dominated by strange, eerie guitar soloing before the pace picks up again and its back to thrashing Death. Really the two demos are a lot alike, with the 1991 demo being an even rawer version of its successor. The most wicked song of the whole compilation must be ‘Sanctimonious Godz’, also from the 1991 demo. There’s so much going on in it. The defining feature is the dark undertones, evocative and powerful. These demos are great and worth adding to your collection. As with so many defunct bands one wonders what could have happened had events conspired to keep SWAZAFIX alive. We can’t know but at least we have these demos on CD. www.myspace.com/swazafix666, www.vicrecords.com