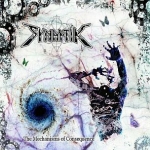 Be prepared for a ride with the time machine! A ride that takes us back in time roundabout 20 years. In those days, modern Metal was all the rage, Metal was mixed with Alternative Rock or got industrialized. The return of the older fashioned Metal was not in sight yet. All those newcomer bands who played a classic style of Metal had a hard time, no label really cared for the music they played. So they started to release their music on their own, because pressing CDs was rather low priced already. Aside from some Power or Speed Metal acts who chose this way, there were a real bunch of bands who dedicated themselves to Progressive Metal, Techno Thrash or just technical Metal. But even though they had an album (or more) up their sleeve, nearly any of these bands were buried by time and dust, just because they were there at the worst possible moment for this kind of Metal. HAMMERFALL and all those who followed them just swept them away a few years later. To return to the present, the first album by the English newcomers SYNAPTIK would have fitted those days perfectly. “The Mechanisms Of Consequence” sounds like it was recorded in 1994 and released by the band on their own. But this is not automatically something bad – it’s just anachronism in perfection. And it’s really comprehensible as well, since three members of SYNAPTIK played in INNER SANCTUM and their successors FIFTH SEASON exactly in the days I tried to recall. So it is no wonder that from the first notes of ‘Truths That Wake’ I thought to have traveled back in time. This one already points out the path the album takes, with elements of Techno Thrash (WATCHTOWER, anybody) and some more traditional progressive moments that are more in the vein of good old HADES. And SYNAPTIK do well in what they do. Check songs like the musical rollercoaster ride ‘A Man Dies’ or the complex ‘As I Am, As I Was’. They would have been a joy to listen to twenty years ago either. And just to prove the connection to HADES, the album has an extra track as well, with an alternative version of ‘Your Cold Dead Trace’ that features the vocal performance of no one else than Alan Tecchio of HADES fame. And Mr. Tecchio shows that he’s still a damn good singer. Well, you might say that this kind of music has been there before, and maybe even better, or that this is sooo out of style. But good music is never out of style, and so all those who have a weakness for technical Metal rooted in classical Metal are welcome to check out www.synaptikmetal.com or www.facebook.com/synaptikmetal