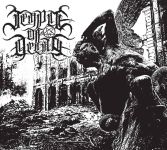 One-man Black Metal bands are always iffy. Will it sound like some dude in his bedroom recording simple, cheap-sounding tracks recorded with a Casio and an out of tune guitar? Or will it sound like a full band that knows what they’re doing? TEMPLE OF DECAY (all instruments by Mortt) are definitely the latter. This being their first release, it’s a damn good one. And with talent like this, it’s interesting to see where the future takes the band. The first track ‘Last Manifestation Of Like’ (as the EP’s also named), begins with energetic guitars, solid drumming and aggressive vocals. There’s no messing around here. Mortt’s a confident musician who sounds like he’s been recording for eons. ‘In The Name Of Spear And Thorn’ sounds like the thrumming of apocalyptic demon-spawn’s wings. Or maybe the guitars just sound furious and full of swagger. ‘W Blasku Martwych Dusz’ is a different sort of howling creature that still impales us with its Black Metal fierceness. Actually, the wolf at the beginning sounds like it’s been smoking filterless cigarettes for decades. The fourth track ‘Enlightenment In Pain’ has a little Gaahl – during – GORGOROTH – era – style vocals with swarming guitars and bludgeoning drums. ‘Ku Koncowi’ ends the EP as good as it began. Here’s a band (well, one-man band) who can deliver a solid Black Metal package that doesn’t let up. If “Last Manifestation Of Life” is any indication of what TEMPLE OF DECAY will hand us in future releases, we’re all in for a hell of a good time. There’s nothing not to like about these five songs. You can contact Mortt at templeofdecay6@gmail.com. The EP can be ordered from: www.facebook.com/wolfmondproduction.de