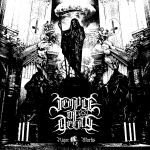 This is the debut album of this one man band, that is based both in Poland and Ireland. Usually one man bands are a hit or miss, especially when they use technology to perform instruments they are not good playing at. But once in a while even with that some good things happen. Well, in this case it all sounds very good, they have more of a sound close to OLD MAN’S CHILD and DIMMU BORGIR but without keyboards and lesss of a symphonic approach, and with a more death metallic edge. Some songs even sounded to me a bit like GOD DETHRONED and although there is not that much Thrash in here, the guitars do have that juicy flavor that some other bands use giving praise to old school Thrash. What I like here is the many riffs included that recall many eras of extreme Metal, from the cold blizzard beasts to invoke that hell is here. Some songs are in English while others are in Polish, and to end it up there’s a very well done VENOM cover. While this might be a case of a band that sounds like many others you have heard before, it is quite entertaining and has so many great things, that fans of riff orientated Black / Death Metal must check them out. www.facebook.com/godzovwar