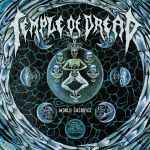 TEMPLE OF DREAD continue their journey with full force, as they just released their second album “World Sacrifice”, only 11 months after releasing their debut album “Blood Craving Mantras”. And, the band follows the line of the first album, dealing with a pure old school Death Metal, in the ruts of old MORGOTH, old DEATH and OBITUARY. The references are clearly recognizable, but TEMPLE OF DREAD plow their own passage with simplicity, and they manage to keep it even, while growing heavier and lifting the foot. Proof of this with the darker and creeping ‘Commands From A Black Soul’ where variety is essential, as well as the equally exciting ‘Enforcers Of The Vile’. This essence is also understood on ‘Alive I Rot’, with warlike hints carried by darkness and passages conducive to headbanging, which mixes genres and speeds in an efficient and flawless way. As malignant melodies unfold in ‘Symbiotic Delusion’ and ‘Dedication’, to cast even darker shadows, the Teutons might only made ways to present the classic cover, ‘Sold Baptism’ of their legendary compatriots MORGOTH (from the mythical “Cursed”, released in 1991), in a faithful version. No doubt, the most seasoned listeners would immediately recognize MORGOTH iconic riffs, but the Germans gave this track a second youth before closing the album with the mystic ‘Blood Craving Mantra’, where ritualistic incantations invoked; that slowly comes, before exploding one last time. Producer Jörg Uken (drums) from Soundlodge Studios, is again responsible for the fat production and shoots his way through the tracks skillfully, while guitarist Bünnemeyer, also incorporated his thrashy influences into the riffs in some songs and thus creates the highly engrossing varieties. And obviously the bleak lyricism made a perfect platform for Jens Finger (SLAUGHTERDAY) to produce raw rasp, and barks his throat to screams bloody gore. Although, it’s less than a year after their debut, TEMPLE OF DREAD returns with a second full-length that expands their journey, and created Death Metal that starts from strong references to tradition and the cult of 80s / early 90s. Purists would say that the terrain of “World Sacrifice” is narrow and never abandoned for a second, and that fact makes this record foreseeable, yet it’s totally earnest. Embedded with album artwork envisioned by none other than Jesse Peper, who has already wielded the brush for PUNGENT STENCH, with “World Sacrifice”, TEMPLE OF DREAD further growing as a flag bearer of Teutonic old school Death Metal. Explore more about the band at www.facebook.com/templeofdread and visit their label page at www.facebook.com/testimonyrecords.