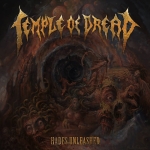 Dennis from Testimony Records must have a weak spot for grimey old school Death Metal with a touch of the good old Swedish sound, before it all became too melodic, and a great ear for tracking down bands delivering that exact style of sonic mayhem. German TEMPLE OF DREAD has been around since 2017 and “Hades Unleashed” is their third album, an album a year since 2019, all on Testimony Records. I’ve not been that impressed by the two first albums, they both have their moments, no doubt about that. Though a tad too rehashed material of what we have heard a time or two. The same goes for the new album, the guys can’t deny their love for good old crushing Death Metal, though there is a tad more punch on this album. The band has become more seasoned song writers, the material is more organic and flowing, and the homages are blended quite nicely into the songs. “Hades Unleashed” is a tour de force of the good old nineties, where most of the great Death Metal was created, there are some songs where you think: “who made that?”, and some songs where you just bang your head to the beating, the hooking riffs and great growls. What Death Metal fan can withstand the power of crunchy guitar riffs, pounding rhythm patterns and a crushing growl? Not many I guess! Though I’ve been listening to this album countless times before writing these words, and as I write now, I enjoy the album quite a lot, though will I remember it in ten years? I’m not that sure. Enter the serpent garden: www.facebook.com/templeofdread, www.facebook.com/testimonyrecords