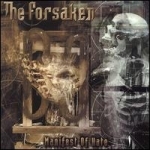 Another represent of this new breed of Swedeath hate Metal is THE FORSAKEN hailing from the Malmö area! This five-piece (featuring members of EMBRACED and EVERGREY) already attracted my attention with a magnificent three-track demo-CD “Reaper”. Two songs of this aforementioned release (namely ‘Truth Of God’ and ‘Deamon Breed’) are also available on THE FORSAKEN’s stunning debut album “Manifest Of Hate”, which abounds with ten tracks of melodic, yet aggressive new school Death Metal in the vein of AT THE GATES, ARCH ENEMY and CARNAL FORGE spiced with a dose of deep and brutal vocals by Anders Sjöholm of OMINOUS. Personally I don’t think that THE FORSAKEN come up with something extraordinary or revolutionary, but these guys impress the listeners with their sheer intensity, relentless speed and also musical skills, so there’s no need to hesitate in purchasing the “Manifest Of Hate”. Additional selling points are a powerful production in Abyss studios by Tommy Tägtgren and a great artwork by Mike Bohatch of EyesOfChaos!

THE FORSAKEN - Arts Of Desolation - by Ramon Claassen