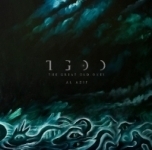 French Black Metal for a chance… Well, ‘Black Metal’ may perhaps be kind of a limited musical box for this 5-piece French act as the musical style of them is described as Ambient / Post-Black Metal. Fair enough. Let’s call their style as Ambient / Post Black Metal then, even if a good bunch of people might also feel allowed to call them as an atmospheric Dark and Doom Metal band as well – me included. However, THE GREAT OLD ONES’ debut record, “Al Azif”, takes a listener into one intense and mindless journey right from the first moments – and never let go until the album has come to its end. One can hear basically from everything there’s lots of burning ambition, intensity and sheer passion behind this record; the main motto on this record obviously being: ‘Let’s do it differently – and simply see where it will take us eventually…’ Judging the material on “Al Azif”, the guys of THE GREAT OLD ONES should not be too worried, as I am sure this record will find its right audience. The lengthy, multi-layered and deeply atmospheric songs on the album, do offer some disturbing yet distracting moments – sometimes probably driving listeners to think in what types of drugs one is able to create the kind of stuff that these French fellows do on their debut record. It goes through your skin… easily – and trying to escape this somewhat weird feeling, becomes nearly impossible the more you get tangled with this. THE GREAT OLD ONES have often been compared to bands like ALTAR OF PLAGUES, WOLVES IN THE THRONE ROOM and FEN, so you can only figure out what’s ahead of you on “Al Azif”. This was pretty much a refreshing yet quite welcomed musical experience for Yours Truly even, as THE GREAT OLD ONES is actually kind of an unique and unorthodox sounding ‘you-name-it-Metal-act’ nonetheless. More info at: www.thegreatoldonesband.com, www.myspace.com/ladloproductions