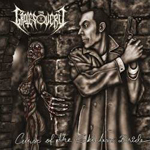 Everybody reading these pages on a regular basis should know by now that Rogga Johansson is a guy running a bazillion bands and projects with lots of big names and legends in the Death Metal scene. To list just the most prominent of these bands would already go beyond the constrains of this review. One of the most constantly recording projects of Rogga is THE GROTESQUERY, that features him on guitar alongside his favourite sidekick Brynar Helgetun on drums, Johan Berglund on bass and none less than Mr. Kam Lee on vocals. Of course this is name dropping, nothing else. But THE GROTESQUERY is also Rogga in his sheerest form, so to say. You can hear him playing the guitar here without knowing he’s involved in the band. Sometimes it reminds of REVOLTING, sometimes of PAGANIZER. To some this might be a blessing, to some a curse. The majority (at least I think so) who concerns this as a blessing should be very pleased with “Curse Of The Skinless Bride”, since this album is, as expected, Death Metal in its finest and purest form, with Kam Lee doing a very good job as well, even though it might not be his greatest performance. Well, we’re talking about the man who did the vocals on a milestone, so I should better not draw any comparisons. What makes THE GROTESQUERY in general and “Curse Of The Skinless Bride” in particular pretty unique is the fact that the band tells a horror story on their up to now three albums. Some short spoken interludes make this album a kind of radio play, refined with a lot of Death Metal music, of course. The concept continues the story told on the first two albums of THE GROTESQUERY and tops the story off, making it a trilogy that picks up influences and motives of H.P. Lovecraft and Edgar Allan Poe. Well, most people reading this are more interested in the music on this album anyway. For those I’d like to state that this album should be a feast for all lunatics of Metal of Death in the old school way. Especially the slower moments of this album are damn fine, for example ‘Downfall – It’s All Gone To Hell’ which is my personal favourite and listening suggestion here. But as I said before: this band features Rogga, and even though he seems to be ever-present, he’s a man who always delivers goodie stuff anyway. So you’re welcome to check out THE GROTESQUERY, in case you haven’t yet. To find out more, go to www.facebook.com/thegrotesquery or www.cyclone-empire.com