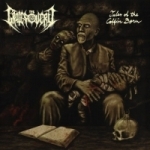 In the beginning there was darkness and the musical aim of combining the atmosphere of rusty horror stories by Poe and Lovecraft with simple but nevertheless effective Death Metal. THE GROTESQUERY is a further co-operation of workaholic Rogga Johansson (PAGANIZER, DEMIURG, EDGE OF SANITY, RIBSPREADER, PUTREVORE, SINNERS BURN, BONE GNAWER etc.) and his blood brother Kam Lee (BONE GNAWER, ex – MASSACRE). I’m for sure not the biggest fan of the latest Johansson releases but consequently I have to admit that this release is a real highlight – musically and lyrically. The concept story of a father who could not accept the death of his son with deadly consequences has been created over several years – to be exact since 2003 – by Kam Lee and the decision that this concept isn’t suitable for his major band is more or less the hour of birth for THE GROTESQUERY. The story is more than pure background and every song is introduced by a short story fragment and during the 10 songs you can follow the father on his abyssal descent. Musically the album is old school as fuck with simple structures but this simplicity makes “Tales Of The Coffin Born” so great – the good old times are shining trough and especially certain British Death Metal acts – a little BENEDICTION here, a little more BOLT THROWER there – bring back sweet melodies. Every headbanger who’s fed up with the ultra high speed mania should buy this album immediately. Again a Cyclone Empire release which shows that Death Metal is more than just returning to the surface of the Metal movement. For more info check out: www.myspace.com/thegrotesquery, www.cyclone-empire.com