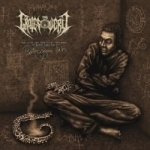 One of the most awaited albums of the year has finally been unleashed upon mankind and it is undoubtly the 2nd opus from Horror Death Metal masters THE GROTESQUERY and their long title work “The Facts And Terrifying Testaments Of Mason Hamiltin: Tsathogua Tales“. As Jack the Ripper used to say – let’s go by parts – because this album has so many things to mention that it is necessary to keep a certain order. For those ones that are not familiar with this sickened combo, let me tell you that the vocals are courtesy of no other than the master of masters Kam Lee… yes Kam Lee… the same one that took part in MASSACRE’s first album… however… do not expect any similarity with this classic band, THE GROTESQUERY is completely different from a musical standpoint as well as the vocals. What we find here is not a vocalist… it is an actor… an individual that performs through several types of voices, sounds and textures, different characters across the entire album… something absolutely superb and brilliant, becoming one of the best works in Death Metal, capturing all the expertise from an artist that has been into this for YEARS… something that most of ultra-brutal pseudo technical pig squeal boring kids will not simply achieve… here we have one of the main icons of Death Metal delivering what he knows best… pure sorrowful disgrace and torment on an intelligent approach. If voices are simply brilliant… now let’s go to the music… pure Death… pure mayhem… pure essence… nothing is performed because of a pose or to fill out… everything has a purpose… from the devastating drumming architecture with that sound really well produced and destined to add brutality to the overall sound, passing from the notorious and brilliantly executed guitars brought to you by another heavy weight of international Death Metal: Rogga Johansson (DEMIURG, PAGANIZER, BONE GNAWER). The arrangements on this department are crowned with melodies, solos and crushing riffs that invites the audience to a continuous headbanging on a ecstasies of continuous glorification to this music… dark, catchy and most of all… EVIL… Another element in this murderous creation of band and album are the bass lines… the sound here is so heavy and so clear that your ears start bleeding… bleeding and begin for more. Crowning this masterpiece of work we have to mention that these masters didn’t just come up with 11 new songs… the whole thing is a story… divided in chapters… yes… what a marvelous initiative to deliver the whole scent of this album… with that said, the first two tracks compose chapter 1 called ‘Asylum’, then tracks three and four are the second called ‘The Island’… and so forth… until completing the eight chapters of this memorable piece of horror art that is sure to become a classic of classics. I can only say that this album is easily the album of the year… heavy, well produced, with one of the bests works in vocals I’ve heard in my entire life… mature musicians showing that Metal… and especially Death Metal is much more than guitars with distortions, double blast and growling voices… Death Metal is about creating and recreating atmospheres, evoking feelings and awakening the old demons that many of the joke clones bands that infest today’s scene would simply not understand. Wrap up… from 1 to 10… 10… humble advice… get it now… this is up to become a classic… simple as that!!! www.facebook.com/THEGROTESQUERY?ref=ts&sk=wall, www.myspace.com/thegrotesquery, www.cyclone-empire.com