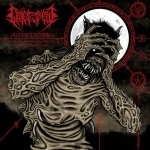 Without doubt Rogga Johansson must be the most creative guitar player in the extreme Metal scene, hands down the winner. He has recorded tons of riffs and bands and projects, and for some of us, his trademark way of composing is there, no matter how hard he tries to make it different from band to band. This one is maybe one of the more powerful units he is member of, with no other than the legendary Kam Lee (ex – MASSACRE, ex – DEATH) on vocals. Actually this their fourth album with a quite stable line-up. And the music, as one can expect is pure Death Metal. Obviously here we have a bit of a Swedish touch, to me it sounded with good bits of DISMEMBER with a heavier approach, and to a lesser extent some of the more extreme Thrash Metal bands in the name of SODOM, POSSESSED and early SLAYER. I was curious enough with this material to get a listen to what they have done previously and except for production differences, it is all the same. Do not get me wrong, on its own it is very strong material, the riffs, for a better word are “juicy”, yet it all sounds like done in a winning formula. The vocals of Kam Lee are a bit different from what we know and like of MASSACRE, yet that is a good thing as it gives the band a distinct sound. And the rhythm section does its thing in a killer way. The thing is that, even if this is a feast of riffs and hymns praising death, it tends to sound very similar, and no songs stands above. I find PAGANIZER to be a way more interesting band in a similar style and with the same music creator, yet the old school Death and Thrash Metal feeling of this one and the brutal vocal delivery makes it up in many ways to be a quite entertaining album. If you are a fan of the band members you cannot go wrong, heck, even if you are a Death Metal fan, I am sure you will enjoy this one. Just do not expect nothing more than what it is. All additional band information you will find at www.facebook.com/thegrotesquery, label contact: www.xtreemmusic.com