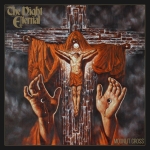 Germany has once again became a hotbed for some great new traditional Heavy Metal in recent years and the latest band to turn some heads and prick up ears on the scene is THE NIGHT ETERNAL from Essen who have just had their debut album “Moonlit Cross” unleashed. This debut is an extremely impressive and powerful release and ticks all the right boxes for this writer. First of all there are catchy riffs and hooks in absolute abundance, every song is full of them, the guitar work and songwriting is top notch and you will be hard pushed to find a better album in the genre released this year. This is a masterclass in traditional Heavy Metal, there’s plenty of nods to classic IRON MAIDEN but also the style and sound of THE NIGHT ETERNAL reminds me a lot of those first 2 awesome IN SOLITUDE albums, so overall it is like a (dangerous) meeting of both those bands. The riffs are sublime and punchy, the sound is sharp and crisp and the leadwork is stellar, the duel guitar tag team of Rob and Henry is superb, they really have crafted a very strong album here. The production is weighty but clean so every instrument cuts through the mix as deadly as a scythe (pun intended) and the whole mix just perfectly projects out of the speakers at you. The vocals of Ricardo Baum are very strong, he has a solid voice and delivers great hooky vocal lines which will embed themselves in your head. It is a great Heavy Metal album from start to finish and if you love IRON MAIDEN and IN SOLITUDE then you will find a lot to love about this album. This album should take THE NIGHT ETERNAL onto bigger things and gain them a lot of new fans along the way. A gem of the German Metal scene, if I had to give it a score out of 10, it would be a 10, it really is THAT good. The true ESSENce of Heavy Metal runs throughout the musical veins of “Moonlit Cross”. www.thenighteternal.bigcartel.com, www.van-records.com