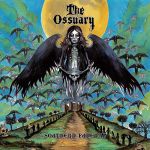 THE OSSUARY was founded not long ago in October 2014 in Southern Italy, but their sound feels like a trip back in time. Their effortless mix of Doom Metal, Progressive Metal, Hard Rock and Heavy Metal is very exciting and wears a very nice old school signature. Their first two demos and impressive debut album “Post Mortem Blues” has surprised everyone and achieved the heartfelt appreciation from the faithful and passionate followers of ‘70s Hard Rock and early ‘80s NWOBHM with traditional Doom Metal. Continuing building up the foundation, this impressive Italian Heavy / Doom force unleashed their second album “Southern Funeral” in early 2019 in cooperation with Supreme Chaos Records. With the first listen, mindful listeners will understand the influential depth and variation flowing in the veins of these Italians, ranging from 60s / 70s Blues based Heavy Rock bands like BLACK SABBATH, GRAND FUNK RAILROAD, TEN YEARS AFTER, URIAH HEEP, CACTUS, WISHBONE ASH, CAPTAIN BEYOND, DEEP PURPLE, LED ZEPPELIN, RAINBOW, CREAM, BLUE CHEER, IRON BUTTERFLY; to progressive bands like JETHRO TULL, ELP, KING CRIMSON, PINK FLOYD, and heavy / speedy bands like early ANGEL WITCH, THIN LIZZY, AC/DC, JUDAS PRIEST, MAIDEN, MOTÖRHEAD or Doom lords SAINT VITUS, PENTAGRAM, WITCHFINDER GENERAL, etc. Actually there’s a lot of other bands that might also have played a role but the inherent specialty of THE OSSUARY is they are masters of twisting all their influences to their own advantage, to create a heavy and dark sound that comes off as current. Although, just two years after “Post Mortem Blues” the successor “Southern Funeral” was released, obviously in this record the band progressed as musicians and certainly made significant drive in the songwriting zone. As, in “Southern Funeral” they skillfully used their vast range of variables and deliver a record highly rich in textures, crafty drum patterns, intoxicating riffs and plethora of majestic solos. From the very beginning it will be evident, as the album opener, ‘Walk Into Sepulchral Haze’ starts with an organ intro and progressed with a fanatically catchy guitar riff and hammering rhythm section. Quite contrary, ‘Maze Of No Return’ will appear next as a speed up tempo song with enticing solos from twin guitars which turns to some dark melody towards end, lead by fantastic drumming. The following song ‘Belphegor’ will send you back to the roots of 70s dark heavy Blues and it will linger on your head like a hum. The title track ‘Southern Funeral’ is full of character, with its slower parts and addition of subtle keyboards, its archetype of an intimate doom & gloom creation. ‘Eternal Pyre’ will carry this impact with its basic SABBATHian riff and psychedelic / BEATLESque moments that reoccur half way in the song. ‘Sleep Demon’ might be the most dynamic and weird one in this release with its moody nocturnal intro and ending up-tempo with breaks and excellent guitar work. The incoming ‘Under The Spell’ comes directly from the early 80s and with its MANILLA ROAD tonality, is the best kept secret of “Southern Funeral”. This record ends with ‘Shadow Of Plague’, which appears to be a fitting ending as it has summed up everything this record sounds like: classic heavy riff, mysterious and forlorn chorus, speedy parts and a slow progressive / psychedelic culmination. With a visionary artwork by Rossella “Roxhell“ Abbattista, “Southern Funeral” proved to be an captivating listening experience and shall please everyone exposed to it. Explore more about the band at: www.facebook.com/theossuary or visit their label page www.scrmetal.de.