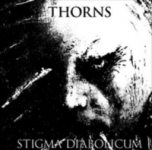 Even though Norway’s THORNS managed to release an excellent self-financed debut album back in 2001 via Moonfog Productions, their old tape recordings still seem to gain a massive interest in underground circuits due to the everlasting cult status of the band. So, no wonder that they officially got re-released again, this time via the small but fine Greek label Kyrck Productions. What surprised me the most is the fact that the sound quality on “Stigma Diabolicum” is even better than on the bonus disc of the limited Moonfog edition of the THORNS vs EMPEROR release. The most popular (and probably best) classic recording of THORNS is without a doubt their 1992 demo “Trøndertun” (named after a school called Trøndertun Folkehøyskole in Trondheim, Norway where the material got recorded). The two featured tracks ‘Ærie Descent’ and ‘Funeral Marches To The Grave’ open this compilation and musically quickly separated THORNS from the typical Norwegian Black Metal scene of the time. Unlike their countrymen in BURZUM, MAYHEM, EMPEROR or DARKTHRONE (who all played a very grim and extreme form of Black Metal), THORNS already concentrated on midpaced, very atmospheric, yet rather dark compositions with almost psychedelic sounding guitars. Especially these two songs had a massive influence on other bands (incl. EMPEROR, who also adopted parts of those elements later on in their material). Next up on this compilation is the band’s six-song “Grymyrk” rehearsal demo from 1991, for some strange reason with a slightly changed running order though… It was never officially released and has no vocals, but already showcased a lot of the potential that these guys had at the time. The last track, ‘You That Mingle May’, even got re-recorded for the “Moonfog 2000 – A Different Perspective” compilation (featuring Fenriz and Satyr). Tracks 9 – 13 originally weren’t included on the THORNS vs EMPEROR release as they are from the pre-THORNS band STIGMA DIABOLICUM (hence this album’s title). STIGMA DIABOLICUM were formed way back in 1989 by Snorre Ruch (aka Pedophagia / Blackthorn / S.W.Krupp) on guitar / bass and Marius Vold (aka Coprophagia) on vocals / drum programming. The line-up was later completed by Harald Eilertsen (bass) and Bård “Faust” Eithun (aka Fetophagia) on drums. Marius also used to be part of MORTEM (Norway) and ARCTURUS, Snorre played in MAYHEM for a while (some of the riffs and lyrics on “De Mysteriis…” were created by him) and as most of you probably know Bård used to be in a shitload of bands / projects, incl. EMPEROR, ZYKLON and ABORYM (to name just the most important ones here). STIGMA DIABOLICUM still used to be a lot more straight forward, raw and thrashy and the material that is featured on here was taken from two different rehearsal tapes. I suppose the better known is probably the “Lacus De Luna” rehearsal, which originally featured a lot more material (incl. cover tunes by ANTHRAX, SLAYER, HELLHAMMER, METALLICA and EXODUS), but unfortunately only ‘Mare Frigoris’, ‘Into The Promised Land’ and ‘Lacus De Luna’ made it onto this disc. According to Snorre, the band’s name STIGMA DIABOLICUM had to be changed into THORNS in 1989 “because it became very popular with latin names at that time” and they didn’t want to be associated with that… The last two tracks on offer here (‘Thule’ and ‘Fall’), were taken from a THORNS rehearsal again, but due to the raw aggressiveness could musically still be more associated with the STIGMA DIABOLICUM period. So for obvious reasons, this is certainly not a release for those of you who prefer massive productions, but a compilation of material with a historical value of a band that was definitely ahead of its time. From what I’ve heard it is supposed to be limited to 1.000 copies, so make sure to contact Kyrck Productions before it’s too late.