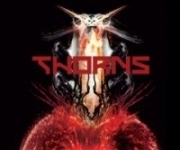 Even though THORNS mainman Snorre W. Ruch probably won’t label his band with the term “Black Metal” (anymore?!), his long awaited and way overdue first full length is still more evil and true to the bone than the majority of bands that are polluting this genre nowadays with their nice keyboard sounds and mainstream productions (not to mention all their stupid pseudo erotic coverarts). Well, ok – the THORNS cover ain’t necessarily what I would consider moody or fitting either (especially the logo sucks big time), but musically this is by far the most convincing release in quite some time! The overall sound is typical Norwegian (with the usual guitar tuning and Black Metal-ish production), but reminds me a lot more on times before this music turned into a fashionable and easy accessible sub genre of Pop music. Björn Dencker (a.k.a. Aldrahn) of DÖDHEIMSGARD (or DHG as they prefer to call themselves now) and SATYRICON’s Satyr Wongraven both contribute their excellent and very grim vocals (Satyr also co-produced the album with Snorre), while MAYHEM’s Hellhammer plays all the live drums. The result is a (Black Metal) release that could easily bring this music a big step forward without denying its original roots. The eight songs live off a cold and eerie overall atmosphere, which (very convincingly) got combined with a few industrial elements and some ordinary old school Black Metal stuff. Snorre’s typical and extremely unique riffing is still very much present on the whole album, while his songwriting partly obviously has become a lot more aggressive than back in his demo days. In its entirety it’s actually a very diverse mixture we get here, cause while the intense riffing in the middle section of ‘World Playground Deceit’ still reminds me a bit on the riffing in the title track of SLAYER’s ‘Reign In Blood’ album, the first part of ‘Underneath The Universe’ is so mellow and atmospheric (yet very oppressive), that it would easily fit on a dark soundtrack album. And then you’ll also get the doomy and mechanical ‘Shifting Channels’ with its eerie traditional Black Metal feel to it. So, yes – there’s definitely a lot to discover on here and every (open minded) worshipper of the Norwegian Black Metal underground will surely get a kick out of this! Impressive!!