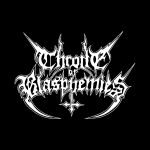 The Death Metal scene in Chile is still thriving, they’ve been relentlessly releasing wicked Death Metal in lethal doses for quite some ages now, and much of it is of a quite high quality, if you like your Death Metal a tad chaotic and noisy. This band, together with EVIL HATRED, rose from the ashes of THY SERPENT’S CULT, a band that made a couple of great releases, that I raved quite a lot about when they hit these shores. Though the band didn’t work out in the length, and now we have two hellish offsprings. EVIL HATRED released their first and quite crushing demo "Alive (Demo MMXVII)" earlier this year and now THRONE OF BLASPHEMIES is ready with their first output, this 5 track EP. As already written we are situated in the world of Death Metal, a good chaotic mix of all good from the old Florida scene, DEICIDE, as in THY SERPENT’S CULT is shining through, together with old MONSTROSITY and MASSACRE. Heavy, pounding, with some fast parts and some noisy edgy guitarleads and some doomy parts. The music is very intense with a raw and chaotic feel to both songwriting, performance and production, features that suit music as this. A promising first output from this band, neither EVIL HATRED or THRONE OF BLASPHEMIES are as punishing as THY SERPENT’S CULT became, though both bands are quite promising and I am looking forward to following both into the future, as they both have edge, intensity and raw nostalgic feel to their music. Into glory ride: www.facebook.com/throne666blasphemies, https://soundcloud.com/throne666blasphemies