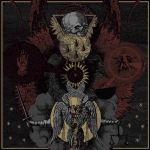 Ichor means an ethereal fluid taking the place of blood in the veins of the ancient Greek gods."Ichor (The Rebellion)" perfectly illustrates the plague infested, tormenting and apocalyptic nature of THRONUM VRONDOR. From the depths of the Belgian underground they emerged, founded by Vrondor (guitars, bass) and Crygh (drums, vocals) in 2005. Initially they played as a duo and released in this constellation their first two studio albums, “Vrondor I – Epitaph Of Mass-Destruction" (2007) and "Vrondor II – Conducting The Orchestra Of Evil" (2009) based on the opus magnus of Dante; both releases contain raw and enthralling Black Metal which has always been the guideline through the band’s history. The vocals on the albums were done by both Crygh and session vocalist Noctiz. In 2015, the singer SvN joined the band and they began the recordings of the third album. The album was recorded, mixed and mastered by vocalist SvN and released worldwide in co-operation with prestigious Pulverised Records on CD, in different vinyl editions and digitally. The Belgian trio plays Black Metal with a desolate atmosphere and intensity which also applies to this release; a dominant influence of Norwegian and earlier German Black Metal, which can be felt throughout the record. With the addition of SvN, the songs on this album combine the typical genre of the previous two albums and also by taking over the recording, mixing and mastering, he brings deep and hearty rooted vocals of Death Metal aesthetics. With their own take on aggressiveness they formed music that can sound repressive and malicious, but striking at the same time. And the trio knows exactly what these words above mean, as their third album, “Ichor (The Rebellion)”, is here to establish. The crude and atrocious impact of ‘A Symbol Of Acrimony’, the appealing tempo of ‘Ceremony Of Atonement’, ‘Ichor (The Rebellion)’ represented with its somber keyboard parts that blend with swirling guitar riffs, the rumbling and vigorous tempo variation of ‘Diety’ with a fine bass guitar and drums work, sinister melodies and forlorn atmospheres in many moments of ‘Doom Upon Doom…’ and the audacious clean voices parts of ‘Vision Of The Seven Tombs’ will evoke the finest moments throughout the album. The raw yet potent production of the album also paved the atmospheric essence of this record, like the final track ‘The Last Specs Of A Dying Light’, where the tempo was slowed down to break forth the haunting melodies. The album artwork concept and illustration was envisioned by THRONUM VRONDOR, in co-operation with Chilean artist Daniel Valencia / Fenomeno Design (BLUT AUS NORD, DEMONICAL, MANES etc). “Ichor (The Rebellion)”, a praise worthy release, showing that Black Metal will keep offering in various forms to its followers and THRONUM VRONDOR is an enticing addition on the genre. “Ichor (The Rebellion)” is available on vinyl in the following color variants of 100 copies in gold/silver vinyl (Pulverised exclusive), 100 copies in red vinyl (Cudgel exclusive) and 300 copies in black vinyl. Explore more about the band at www.facebook.com/thronumvrondor or visit their label page www.pulverised.net