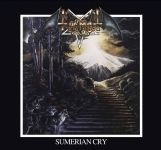 TIAMAT actually recorded the album “Sumerian Cry” as TREBLINKA. But when it was time to release it, they were told that there already was another band with the same name. So, in the fall of 1989, TREBLINKA became TIAMAT. And, besides evolution in sound, their debut release “Sumerian Cry” initiated many things first. “Sumerian Cry” was recorded in October 1989, before ENTOMBED (“Left Hand Path”), CARNAGE (“Dark Recollections”) and DISMEMBER (“Like An Ever Flowing Stream”). “Sumerian Cry” was even the first album ever recorded in the Sunlight studio. Also, Kristian Wåhlin (who has drawn sleeves for UNLEASHED, EDGE OF SANITY, AT THE GATES and many more…) made one of his first paintings in oil for “Sumerian Cry”. With such heritage, TIAMAT were one of the bands that pioneered the Swedish Death Metal sound, essence and visual. Being as one of the pioneers of such playing, in retrospect, “Sumerian Cry” gives the impression of a disc much more original, meaningful and untainted by blind imitation when it was released. Although the album is not brutal like the first recordings of CARNAGE or doesn’t quite have the same buzzsaw sound as their contemporaries, but it is a mystical record, that flows with its paces, simple yet primeval rhythms, aggressive and evil riffs, guttural vocals, dominant and slow atmosphere enhanced by the fucking heavy (and surprisingly transparent) Sunlight sound. This album has an inexplicably engrossing and enticing atmosphere, that with repeated exposure always reveal something much darker and more sinister, which goes beyond the common understanding and essence of typical Swedish Death Metal. If ‘Where The Serpents Forever Dwell’, ‘In The Shrines Of The Kingly Dead’, ‘Evilized’ (with forever unexplainable bizarre intrusion!!) are memorable Death Metal classics, then ‘Necrophagious Shadows’, ‘Apotheosis Of Morbidity’, ‘The Sign Of The Pentagram’ are the genesis of the Swedish Death Metal epoch. Also in lyrical landscape that envisioned and penned by their reverend bizarre frontman, Johan Edlund, are forever awe-inspiring. As ‘Altar Flame’, for illustration, paint a very vivid picture in the mind that fits perfectly with the album’s atmosphere. Now, to any original’s holder, if they are not anymore allured by its musty production, then this re-issue will make them tempted. As now it’s vastly injected with a meatier, chunkier guitar tone like that of GRAVE’s “You’ll Never See”. Vic Records, on their mission of renaissance, for the first time bringing all lyrics in the booklet of this re-issue, plus many scans of underground magazines provided by Nicola Costantini from the “Encyclopedia Of Svensk Dodsmetal”. No wonder, “Sumerian Cry” is TIAMAT’s first, but their most vicious release, as sound wise they evolved from Death Metal to atmospheric gothic. So, to any devotee and newly exposed, this re-issue will surely be regarded an antique surprise in a fresh carton. Discover more about the band and label here: www.facebook.com/tiamat, www.vicrecords.com.