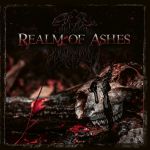 “Fear And Trembling”. That is what their band name roughly translates from Latin. TIMOR ET TREMOR is a German Pagan Black Metal band founded in 2007 that has released three albums, one EP and one demo tape. “Realm Of Ashes” is their fourth full length and their second under the also German Trollzorn Records. All I can say upon first hearing is “Epic”. The overall atmosphere is magnificent, so to speak. It is also a really nice surprise that this atmosphere is achieved without the use of strings, orchestras, keyboards or any other instruments other than drums, guitars, bass and vocals. Again, I could hear and even feel the influences of BATHORY’s “Twilight Of The Gods” and “Hammerheart”. And I get it completely: most bands that play this kind of music can’t deny the immense impact that those two albums had, combining Black and Viking Metal (if the latter exists as a subgenre) and then adding, in the case of TIMOR ET TREMOR, lyrics based in German Paganism. Now, performance wise, I want to start with the amazingly detailed drum work from Jan. He delivers in every aspect. He basically controls and guides the ambience of each song as needed. The drums feature solid double kicks, compelling fills and variations, going from slow, march-like segments to fast, almost blast beat levels. Marco (who also handles bass) and Martin’s riffs are a fierce mix of melodic and intense parts intertwined skillfully to evoke both, unhallowed Black Metal and arcane Paganism. Hendrik’s vocals complete this piece of cold art with his mid to high pitched grunt, which fit perfectly in the frame of “Realm Of Ahes”. The production is stylish and elegant, yet preserving the rough edge and the organic sound associated with early to mid 90s Black Metal. The drum sound is punchy and natural, with the guitars filling in the treble and middle space of the spectrum, with the bass creatively taking care of the low frequencies. I think that “Realm Of Ashes” is a grandiose and intense Pagan Black Metal album that, even if not groundbreaking, showcases a serious commitment to this subgenre. Contact the band at www.facebook.com/chatticblackmetal and get this album (and their previous one, which is just as good) from www.facebook.com/trollzorn