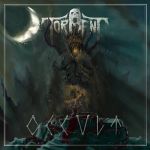 Although I have no exact number, there must be around more than 20 bands with the moniker TORMENT. Having in mind that this certain TORMENT was founded in 2017 and “Occult” (another Death Metal catch phrase) is the first album the choice of names remains uninspired and uninteresting. And, in conclusion, the same can be said about the ten songs (plus intro). A boresome mixture of Death and Black Metal which is neither fish or fowl. Sometimes the whole affair sounds like BEHERIT with a proper sound and then like an uncreative version of American East Coast Death Metal bands like IMMOLATION or CANNIBAL CORPSE. At its worst moments I have the feeling the rhythm section and the guitar are not playing the same song, because it simply does not harmonize. Recently I have read a quotation by John Ruskin, a painter, author and art historian who lived from 1819 to 1900. He said “Composition is the arrangement of unequal things” and having this in mind the songwriting by TORMENT is very unbalanced. What stays the same all the time are the snarling shrieking vocals, which fit to the Black Metal moments, but Death Metal with such vocals is not my taste. In the year 2020 remarkable albums were released by some old heroes like VADER, SINISTER, NAGLFAR, DERANGED, INCANTATION (haven’t heard the new BENEDICTION and NECROPHOBIC albums, yet), so if anyone still is in need for an immature newcomer, here are the contact addresses for band and label: www.facebook.com/tormentofficial, www.facebook.com/greatdanerecords