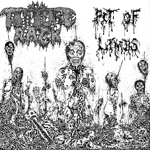 “TORTURE RICK, TORTURE RICK, TORTURE RICK”, we were all chanting! At least I was, as I thought that was what the rest of the crowd was screaming. I did think to myself it was a strange name for an uncompromisingly brutal Death Metal band, but again, I had encountered worse names during my ride within the Metal world. Though I became wiser as the gig proceeded and I eventually found out that the ripping band on stage, making the crowd go crazy at Kill Town Death Fest 2018, was TORTURE RACK, a name that made a tad more sense, now when we are speaking of Death Metal. The band is made up by four quite angry young men, who also are quite active in other Death Metal bands, I can fling around names as WITCH VOMIT, SKELETAL REMAINS, LORD GORE and CEMETARY LUST to name a few, though now you know what kind of people we are dealing with! People who like their Metal brutal and grim, fast and gnarly and hard hitting. I was caught the moment they took the stage at Pumpehuset and ripped the place apart, and went home to check out their music. Two full lengths, they had released back then, and I liked it all! It has been a bit quiet since then, I guess they have been ripping it with their other bands, though now we are about to feast on new material, with this cassette / 7″ released on Extremely Rotten Productions and Parasitic Records. 4 tracks of grinding guitars, sick leads, crushing rhythm patterns and a sick growl. The riffing is quite hooking, the rhythms are brutal, the guitar leads shrieky and so sick, the guttural growl with intensity and some good burps, the total outcome of it, is quite ace! Catchy yet disgusting, I like my Death Metal this way! The tracks, besides the last one ‘Lord Of The Massgrave’ is a tad shorter and straight to the point, than we are used to, though it works and if this is what we have in wait, from a coming full length, ay ay ay… https://torturerack.bandcamp.com, https://extremelyrottenproductions.bandcamp.com