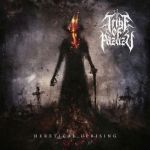 TRIBE OF PAZUZU is Nick Sagias (ex – OVERTHROWN) – vocals / bass , Randy Harris (ex – MACIFECATION) – guitars, John McEntee (INCANTATION) – guitars and Flo Mounier (CRYPTOPSY) – drums. With such members in their ranks, my expectations were high. And I was not disappointed. "Heretical Uprising" is a solid debut EP from a band that deserves your attention. Not just for McEntee and Mounier, but because they have crafted 5 fine examples of amazing Death Metal with Black Metal influences. Nick’s vocals are great. Instead of that annoying ultra low growl (and / or the high pitch scream, take your pick), he’s got an aggressive mid-range grunt with a couple different tones which keep the songs interesting vocal-wise. Also, his bass playing is pummeling and precise, providing the rhythm backbone to the band along none other than Flo. Now, Flo’s drumming is brilliant, as usual. I absolutely dig his cymbal work and how he manages to make those fills flow flawlessly between tempos. In the guitar department, Randy and John just put out a hell of a performance, full of tremolo riffing, both palm muted and open chords and occasionally some eerie melodies and harmonies. The production is good. The overall sound is crushing and every instrument is well positioned on its own. I really liked how the vocals don’t stand out as much in the mix, so they feel like another instrument from time to time. It is obvious that TRIBE OF PAZUZU is not an "old school Death Metal" clone. But the production, although modern, does not feel plastic or sterile. And the master is not brick-walled, which is something pretty rare nowadays. My only tiny complaint here is variation. Besides the excellent musicianship and production, the songs use similar beats and the dynamics suffer a bit. Especially after you spin it 3 or 4 times in a row, such as I did. But with such a line-up, I do think there is a lot of room for growth and development. I am looking forward for more TRIBE OF PAZUZU material, as this is one band you should follow really close. I think we may have one of those modern classics in the making. Go check the band out here: www.facebook.com/tribeofpazuzu. And get the "Heretical Uprising" EP from their label here: www.vicrecords.com