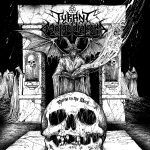 Hell, what a name! After the numerous listening sessions I now can say TYRANT GOATGALDRAKONA without a hitch! This is a Hungarian duo going by the names of Hellfire Commander of Eternal War and Pain (vocals / drums) and Grave Desecration and Necrosodomy (guitars / bass). "Horns In The Dark" is their debut album, originally released in 2013 on CD by Stygian Shadows Production while the copy I’m reviewing comes as a joint LP release between Blood Harvest and Caverna Abismal Records and it came out in 2015. The album’s presentation is flawless and totally conforms to all the guidelines of bestial Death Metal – a fuzzy b/w band photo, hand drawn cover by Mark Riddick, those stagenames, music, everything – it just oozes with underground credibility. The album contains 6 tracks ranging from 3 to 6 minutes and the opener ‘The Mountains Of Irkalla (From Life To Death)’ sets the dark, deadly tone for the whole album. Clocking at almost 7 minutes it comes as a whirlwind of intense drumming and riffing with low guttural vocals immediately calling to mind older INCANTATION works and throughout the whole album this influence always hangs heavily in the air. The production is fucking tight here, at first it seemed even a little overcompressed to me – just a relentless wall of low sounding drums and riffs doesn’t leave too much space for clarity and sacrifices the dynamics, but at the end of the day it manages to create a spooky, ominous atmosphere which I think was the main goal. The third song ‘Church Of Fire’ is my favourite and digs up old, rotten Swedeath riffs lifted from the smelly pits of dismembered graves. It boosts the energy levels with mid-paced rhythms and bloody groove going on. Then comes ‘Dawn Of Decay’ and it’s back into the darkest pits of sulphur and tar where those hellish creatures reign supreme. All songs are varied enough to discern one from another, the longer ones incorporate those choking Doom / Death passages, while shorter get the blood pumping and at 30 minutes it bears repeated listenings without getting boring. Still INCANTATION isn’t my favourite Death Metal band, I much rather prefer them live than on albums (except "Dirges Of Elysium" which has a way better production), so similar sounding TYRANT GOATGALDRAKONA hadn’t hooked me up straight away, but after numerous listenings this album has grown on me, so much so, that now I even like them more than INCANTATION – go figure! Those old school Swedeath riffs add a different dimension to unrelenting, dark passages which make "Horns In The Dark" a lot more memorable. As menioned above, the whole look / feel of the LP is totally top-notch underground quality, it comes on blood red vinyl (100 copies) and black one (200 copies), and it wouldn’t be any exaggeration to call this band the best thing that came from Hungary after TORMENTOR! You can easily check out and buy this release here or go to the band’s Facebook page www.facebook.com/tyrantgoatgaldrakona for all the current info. Highly recommended! Label contacts: www.bloodharvest.se, http://cavernaabismal.blogspot.com 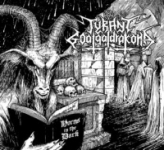 "Horns In The Dark" is the follow up to their debut EP "Sign Of Moloch" which was puked out from Hell itself in 2010. I really enjoyed the five tracker (being available on CD and precious black gold aka vinyl) with its infernal morbid slow parts and bestial War Metal like outbursts which made it a promising start for this blackened Death Metal duo hailing from Szeged, Hungary. TYRANT GOATGALDRAKONA is a side project of the two members Grave Desecration And Necrosodomy & Hellfire Commander Of Eternal War And Pain who are involved in many other bands from their country like MORBID CARNAGE, NECROSODOMY or AHRIMAN (just to name a few). So you don’t have to be scared that you have some rookies here – no, these guys know how to write some killer brutal music. The first impression I noticed after having a few spins to their new material was that this horde definitely increased the level of brutality and added more speed to their compositons. I would also say that the Death Metal elements became even more dominant than on their EP, which is a positive thing in my opinion. You can hear some really great Swedish inspired riffs which will totally crush your weak skulls. The trademark of the band is of course still there (albeit a little bit reduced compared to the debut): the excellent mix of total devastating speed and the crushing doomy parts – but like I have mentioned it before – the faster and high speed stuff prevails. The ability of shifting from one extreme into another can be considered as the outfit’s big strength, nevertheless the higher tempo fits to them as well. An absolute and intense headbanging madness!! The seven tracks being featured on "Horns In The Dark" are very well executed, played by skilled musicians with a good sense to create a dark, violent and morbid atmosphere. Besides the strong songwriting the album can also convince the listener with a dynamic and powerful, yet raw (in a good sense) production. The only thing I don’ t like is the ‘eco-pack’ packaging. It looks a little bit cheap if you ask me and the CD is just put into a pocket of the cardboard digipak (scratches etc. are inevitable). To make it short: "Horns In The Dark" should provide all Death Metal lunatics an entertaining half an hour. For more info check out the band’s website at www.facebook.com/tyrantgoatgaldrakona.