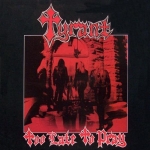 Fittingly to the very worthy anniversary edition of the mighty first TYRANT album “Legions Of The Dead”, the Portuguese label Blood & Iron Records re-released the band’s second album “Too Late To Pray” from 1987 in an expanded and re-mastered new edition as well. This album was originally unleashed two years after the epic debut. And “Too Late To Pray” had a damn hard hard job measuring with an epic all time classic. So it is no surprise that the mighty “Legions Of The Dead” overshadows this album. Yet it can be stated that “Too Late To Pray” is a very good album anyway, despite the fact that the production is not as massive. The focus was put more on clearness than on density. Thus the album sounds a little more conventional. But it still is TYRANT, of course with all the special qualities: the extremely powerful guitar riffs, the fantastic vocals and the thick rhythm section. This time, the album opens up with ‘Tyrant’s Revelation II’, the now already traditional spoken word piece that names all the song titles in a prosaic text. The opening title song ‘Too Late To Pray’ is for the standards of TYRANT pretty up-speed and yet heavy, before ‘Beyond The Grave’ is more focused on the epic side of the band. With ‘Valley Of Death’ we also find a worthy, yet not as catching follow-up to ‘Legions Of The Dead’. In comparison to the debut’s title track, this one is more based on quiet parts. Next up is ‘The Nazarene’, a surprisingly MAIDENesque tune, with a dominating bass introduction. A real highlight of the album is ‘Bells Of Hades’, very catchy and melodic but heavy all the way. And ‘Into The Flames’ nearly is Speed Metal, at least it is the fastest song TYRANT did until that day. The epic ‘Babylon’ and the mainly heavy and rather harsh ‘Verdalack’ with its half acoustic middle part are two more brilliant examples of the qualities of TYRANT. These two pave the way for another long and epic track. ‘Beginning Of The End’ is a rather complex song with a lot of atmospheric parts, and another highlight on “Too Late To Pray”. The final ‘Eve Of Destruction’ is of course not a cover of the famous BARRY MCGUIRE tune from the Sixties, but a fast, heavy and uncompromising song, a fine way to end a fine album. The five bonus tracks of this expanded new edition are not that new for die-hard TYRANT lunatics, since they all have been released before. Most of them served as bonus tracks of CD versions of “Legions Of The Dead” and “Too Late To Pray”, released by the band’s former label Brainstorm Division in 1996. These four studio recordings must have been recorded with Doug Anderson, who was the band’s singer before Glen May entered the band in late 1982. The older versions of ‘Free For A While’ and ‘Heavy Steel’ sound rather toothless in comparison to the ones recorded later that year with Glen May, check the “Legions Of The Dead” anniversary edition to make that comparison. With ‘Leavin” and ‘You Don’t Have To Sell Your Soul’, we have two ballads that are not available with the vocals of Glen May. And this is good, since these two songs are neither representative for TYRANT, nor they are worth checking out. Let’s file this under: “Boring stuff no one needs!”. The final bonus track is an appeasing one, since it is the original version of ‘The Battle Of Armageddon’, released in 1983 on the “Metal Massacre III” compilation. Even though this version can’t keep up with the version found on “Legions Of The Dead”, this is for sure the best of the otherwise pretty negligible bonus tracks. But the songs of the original “Too Late To Pray” album alone are absolutely worth to check this re-release out. Especially when you take into account that it was the last sign of life for nearly a decade until “King Of Kings” came out in 1996, still the most recent album of TYRANT. Since that day, we have to wait for new material, that was announced every now and then, but still not released. Sounds like the TYRANT’s answer to “Seven Moonz Of Xercez”. But I hope for a better end here. Until then, we have to be happy about the re-releases. And, of course, visit the band at www.facebook.com/pages/tyrant/172515856798. And find the label responsible at www.facebook.com/pages/blood-iron-records/836808366381084 or www.bloodandironrecords.webs.com