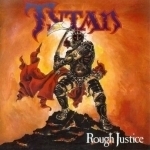 TYTAN was formed back in 1981 by ANGEL WITCH bassist Kevin Riddles and were on a roll with a quite strong line-up, a recorded album and a record deal – when the band disbanded after merely two years of existence. The EP "Blind Men & Fools" did see the light of day, though the full length "Rough Justice" wasn’t released until 1985, when Metal Masters somehow got hold of the rights for the album. The line-up on the album is quite strong, singer Kal Swan has an amazing range and a quite clean powerful vocals, which fits the melodic Rock induced Heavy Metal quite good (Swan re-surfaced in LION and BAD MOON RISING in the years to follow and recorded great albums with both bands – Frank), the guitars of Steve Gibbs are also quite good and catchy, great hooks, amazing catching riffs and shredding solos and melody-lines that sweep you away. The main recording drummer was Les Binks (drummer Simon Wright is also credited on the album), which probably is most known for his work on the albums "Stained Class", "Killing Machine", "Hell Bent For Leather" and "Unleashed In The East" by the mighty JUDAS PRIEST. Who wrote what and why is quite tough to figure out, as the band changed the members quite a lot during the two years they were around writing and recording "Rough Justice", though that doesn’t take away any of the album’s high qualities. Main man Kevin did a good job getting some great tunes written and recorded. The album has now seen a re-release by High Roller Records with a remastering on top as well, which has made the sound a tad more powerful and modern, compared to the original release, which I might prefer to be honest. The reason for the re-release now, is that the band reformed a few years ago to play a festival gig, which apparently was so good fun the lads decided to keep on playing and recorded a new album, titled "Justice Served!" as well, that was released last year. I reckon if "Rough Justice" had been released on a tad bigger label than Metal Masters in 1985, with an active band to back it up with touring and the likes, it would have hit the stadium Rock / AOR wave quite hard in the arse, and that would have taken TYTAN far, though the fate is not always fair and justice not always served! More info at: www.facebook.com/tytanofficial, www.hrrecords.de