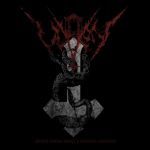 After a boring bell-ringing intro the second full-length by ULVEN starts with a commemorative Mika Luttinen scream (‘Karmageddon Warriors’ by IMPALED NAZARENE), but the one-man band from the USA is far away from the sheer madness of the Finnish madmen. Shortly after three minutes the speed decelerates and the song ends up in a boring outro. The next tracks starts again with a boring intro and this procedure is repeated throughout the whole playing time. Just too many deadening and dull interludes, intros and outros. The song ‘When It’s Cold’ is simply acoustic guitar picking and nothing more. Musically ULVEN are inspired by the second wave of Black Metal, but the music never gets the chance to unfold its force and impact. At no moment something like a flow or continuous atmosphere is established. This is sad somehow, because the genuine Black Metal parts (not the tiresome ambient and acoustic interludes) are done pretty fine, during the song ‘Blood Drained From The Veins Of Black Hearts’ ULVEN even dare to challenge IMMORTAL during their epic moments like ‘Blashyrk (Mighty Ravendark)’ and the song is really good. But, as feared, the song ends-up in two minutes of synthesizer produced sounds. Interestingly enough this edition by Morbid Chapel Records is the third version done by a label. Originally released 2018 self-financed and digital only, then in the same year by Death Kvlt Productions on 12” vinyl and Fólkvangr Records published both cassette and CD versions. So obviously there are some people out there who like this album more than me. And in conclusion, as usual, make up your own mind by visiting the band’s site www.facebook.com/ulvenblackmetal, the current label can be found here www.facebook.com/morbidchapelrecords.