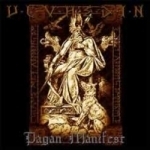 Four years are gone since the release of ULVHEDIN’s debut, the first release of the German Pagan label Einheit Produktionen and still after such a long time it’s more than worth mentioning here. The current Metal community seems possessed by every kind of Pagan culture and by calling your tour ‘Heidenfest’ you will reach for sure more people than ever before even if the same bands are joining this event. So in 2008 the understanding of an album called "Pagan Manifest" is completely different than only four years ago. With this release ULVHEDIN from Norway are joining their homeland family of traditional Viking Metal bands which formed this genre over a decade ago, but for a band heading from Haugesund (hometown of ENSLAVED and EINHERJER) it’s not really a surprising step. What makes this release such an interesting one is the combination of older and more modern Viking elements. Just imagine a band combining the dark moments of "Frost" and "Eld" plus some recent avantgarde elements (mainly the vocals) and the atmosphere of old EINHERJER and TYHRFING releases. But ULVHEDIN are furthermore adding enough own ideas to fuse everything into 42 minutes worth to be called a manifest. Only points of criticisms are the lyrics which are sometimes not completely convincing but who needs a perfect debut – so I’m really looking forward for another Norwegian manifest. http://home.chello.no/~ulvhedin/, www.einheit-produktionen.de