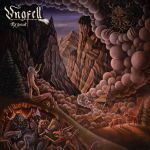 Three years after their second and up to now latest album “Mythen, Mären, Pestilenz”, which marked their first release for the German label Eisenwald, the Swiss UNGFELL are back with a new full length release. Musically, “Es Grauet” follows the path that the duo from Zürich took with its great predecessor and the either fantastic debut “Tôtbringære” from 2017 that was re-released also by Eisenwald two years ago. This means the listener gets a great mix of raw and diversified Black Metal with clanging guitars (that are a bit tamed this time) and medieval sounding Swiss Folklore, complete with lyrics in the country’s dialect. Usually this would already be enough for another album from UNGFELL that is a pure joy to listen to. But the band’s mastermind Menetekel is not only someone to tell a lot of short stories. On “Es Grauet”, he tells a long story that, as far as I got it, deals with a medieval story of murder and witch hunt in a Swiss village in the Alps. Thus it is not a big wonder that “Es Grauet” has just four complete and rather long songs but also four intro pieces and interludes that connect the songs to a whole story. As a result, “Es Grauet” sounds more like it is composed of two long songs flowing into each other. And this concept makes the album even more atmospheric and sometimes visual than the older UNGFELL releases. In this case, I should actually give listening suggestions a miss. Yet I can’t let you go and check out this great album without mentioning the albums’ linchpin ‘Mord Im Tobel’. This song has everything UNGFELL stands for: cold blackness with speed changes, unusual breaks and unique instrumentation (in this case, a jaw harp) that forges a bridge from Black Metal to Folklore. Metal never sounded more like Switzerland than here! And ‘S Chnochelied’ is either great with its contrasting atmospheres. Overall, UNGFELL have absolutely succeeded in creating a unique Black Metal album with a story to tell. And that should be a good reason to check out “Es Grauet”. More band information you will find at www.facebook.com/ungfell-1553339294947606, label contact: www.facebook.com/eisenwaldofficial