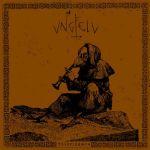 Finally it’s here! The first, and personally, long awaited album of Zuerich (Switzerland) based Black Metal outfit UNGFELL. The name which means “misfortune” in old Swiss language, suits the bands concept just perfectly. Most of the lyrics and the philosophy on their records are dealing with death and his manifold appearance. Be it as a flesh craving goddess the lonesome percussionist at night or the big plague humanity. Death pervades UNGFELL’s work thoroughly. The main head behind this project is Menetekel, who is supported on the drums by Lykhaeon’s Infermita. Here, as well as on the other two UNGFELL releases, Menetekel is a musically restless character who seems to be constantly working. Since 2015 he released five records as UNGFELL and as WYRGHER. Still he is as mysterious as the whole HELVETIC UNDERGROUND COMITEE he is affiliated with. A pentagon of darkness and death which unites DAKHMA, LYKHAEON, WYRGHER, DESPOTIC TERROR KOMMANDO and UNGFELL as an independently working circle. I promise ALL of their releases are genuine onslaughts. Very worth to drown in. Just like "Tôtbringære", a record cast in misery. Music like a never ending lament. Melodies full of grief and anguish, framed by a drummer which constantly drives his unlucky victims in front of them. The vocal works combined with the lyrics are an oil spitting foray through the woods and fields of devastation. As evil as the pledges of death, and the stories people tell each other about it. Therefore UNGFELL follows a path and picks up where the demo (“Demo(lition)”) left off. Playing with different elements of Folk, medieval melodies and blood freezing Black Metal. He has a remarkable lyrical talent to write a story / album. And naturally knows how to keep the attention of a listener, when to allow your mind full bent and when to attack again. These capabilities are making the whole record a very independent and remarkable piece of art. You can just sit down, start the record and let go. It begins with a transcendental grinding, hypnotical like mantra melody. Reminding me of HEXENTANZ, and their delightful rituals. Which provides a seemingly peaceful beginning and welcomes you to this journey but as soon as you’re given your hand your destiny is, doom. With ‘Die Bleiche Göttin’ the hunting has began. From there on the album chases, drags and escorts you along all kinds of emotions and pictures. The second song ‘Gottes Acker’ is a billing with meek ideas about infinity and the end, before the great old one comes and takes you home. No discussion. A song like a tantrum. ‘Trommler Tod’, which is my favorite, crawls up into nearly epic realms to circle a while above you. But finally clings to you and drags you down. ‘Der Ûzsieche Und Sîne Grimmede’ plays with rest and unrest. Rotates between live and coma. ‘Wechselbalg’ appears observantly aggressive and comes upon you like the wild hunt. Then you have seemingly some peace and silence for your soul with ‘Slahtære’. An acoustic song which alters his appearance multiple times. Once its sounds medieval, then it has a touch of Andalusian Folk with Balkan / Turkish melodies. It seems like it depends from which angle you look / listen to it. With this feeling you slide into the last song ‘Der Opfersprung’. The last waltz. A perfect final, and stroll through all the stories you have witnessed. "Tôtbringære" is an excellent record with all the subtleties it needs but still as cold and evil as Black Metal needs to be. Und dunkel wards! More info at: www.facebook.com/ungfell-1553339294947606, http://helunco.blogspot.de, http://gracelessrecordings.storenvy.com 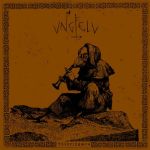 From the city of Zürich in the heart of Switzerland comes the (at least to me) pretty new Black Metal two-piece UNGFELL. Founded in 2014 by Menetekel, who is responsible for all instruments except drums, the band released some recordings on an independent basis to date, mainly in digital form. Last year, Eisenwald took care of the band and put out their second album “Mythen, Mären, Pestilenz”. Now they also re-released the first full length of UNGFELL, “Tôtbringære”, for the first time on CD and vinyl, as there only has been a digital and a tape version of the album in 2017. And for a debut album, “Tôtbringære” is a quite impressive start, since the album is very unique and therefore interesting as far as compositions and special ideas are concerned. The intro piece ‘Viures Brunst’ already hints on the medieval atmosphere that is a kind of common thread on the album. Yet already the first song really got me. ‘Die Bleiche Göttin’ comes along in a Black Metal style that reminds me of early ULVER (“Nattens Madrigal”) in terms of guitar sound and harmonies, but already with some elements that remind of Swiss Folklore. In ‘Gottes Acker’, we find some samples in German (maybe from a movie) and a more relaxed speed, yet there still are hints on medieval atmospheres and the debatable German band EISREGEN, maybe due to the fact that the German vocals remind of their singer. ‘Trommler Tod’ is another very unique UNGFELL styled song with trippy guitar parts and an ending full of old fashioned instrumental and vocal arrangements. Maybe ‘Der Ûzsieche Und Sîne Grimmede’ is the song on “Tôtbringære” that shows all the trademarks of UNGFELL bundled in one song. This song, presumably in Swiss German, is full of unusual arrangements, twists, turns and ideas, like the use of a jaw harp. Yet it still is deeply rooted in Black Metal. Another very substantive song is ‘Wechselbalg’ with unforeseeable breaks. The calm instrumental ‘Slahtære’ brings both catharsis and surprises with mandolins and Spanish sounding guitars. That’s just right in time for the final ‘Der Opfersprung’ that again shows the ability of UNGFELL to create unique music, even in terms of Black Metal. Thus ends the original version of “Tôtbringære”. The re-released edition of the album also offers a brand new bonus track called ‘Das Hexenmal (Andachtsjodler)’ already recorded with the new drummer Vâlant. This one fits the rest of the album in terms of sound, but musically it is a step forward, more fluent without leaving the style of UNGFELL. A good reason for me to check out last year’s album anyway. So, if you are looking for some original and unique Black Metal without blinders, UNGFELL could surely be a band worth checking out. Visit them at www.facebook.com/ungfell-1553339294947606 or https://ungfell.bandcamp.com, or at their label’s site www.eisenton.de