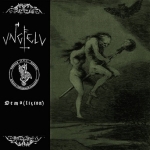 Another disturbing sign of pure Black Metal madness from that arcane Helvetic Underground Committee. While celebrating their misanthropic incantations in Zürich (Switzerland), this pack constantly releases one amazing record after another. It’s frighting with which implicitness they ignite their mephitic torches, blaze their trail towards your stereo system, leave their symbols and burn it down. I mean they do announce release dates. So you are kind of warned. But then again that touted abyss has such an obnoxious attraction. Its useless to fend off. So my advise is to let go and walk that path among them. They will drag you to hell, but at least it sounds good. With UNGFELL’s demo, it takes 48 seconds of sensing and you defect to the enemy. Main head behind UNGFELL is all-round musician Menetekel aka Wyrgher. This time supported on the drums by Infermita (also playing in LYKHAEON) who leads that ritual just perfectly balanced. With a wide range of influences, federating all kinds of styles. And he is doing it with surgically naturalness. Whereby on one side you have a very entertaining and varied drum set to listen to, and on the other side it provides that record a nice organic real instruments sound. Which is just the perfect frame for Menetekel’s creative outburst. Who once again illustrates how to balance music in a proper way. With having a shitload of great ideas be it the riffing, the use of different Black Metal types or the samples (that glass breaking one in ‘Ex Clade Salus’!!!!) but still having a hunch for not exaggerating or overloading it. Considering, this is a demo. I predict with such a bag of good musicians as well as UNGFELL, that the Helvetic Underground Committee gang will strike a few times more. Bottom line is you should get this “Demo(lition)”. And it’s not really an advise it’s more or less an order. http://ungfell.bandcamp.com