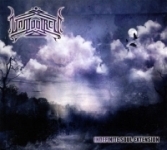 What Unmoored have in common with Dimmu Borgir is way beyond my imagination. Then I agree with the Edge Of Sanity touch and dare say this is the album Edge Of Sanity should have released after “Unorthodox”. Yes, “Indefinite Soul-Extension” feels old of age, but as those of you who drink wine knows, old doesn’t mean bad. Unmoored have their moments of Death Metal and with a careful use of keyboard here and there, these 40 (+6) minutes are off before you know it, which can be both positive and negative. The positive aspect of Unmoored is that they vary their music quite a lot within each song. Basically the growling rule, but in between they use normal vocals as well. Heh, a friend of mine wondered if Dan Swanö did the normal vocals. However, the negative aspect is that as a whole the album consists of various versions of the same track, with one exception. Why did you put the slow track at the end of the album? I mean, you couldn’t have realized the effect such a thing would give to the album as a whole. After 40 minutes of Death Metal I don’t want to leave the album behind with a feeling of…, well, melancholy or something. I mean, this is Death Metal and you don’t end a Death Metal album with some sort of ballad. So, when the album is finsihed I don’t understand shit? What do they want to tell us? Unmoored equal Death Metal? Nah, don’t think so. Which doesn’t mean they shouldn’t include ‘Final State Part III (Posthumous Writings)’, but I think they could safely place this as track four of five. Then again, don’t let my close-minded thoughts affect you in any sense. After all, if you’re smart you just use the memory-button, and arrange the album the way you’d like it to be and you’ll get a fine Death Metal album.