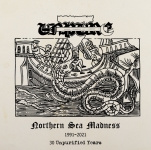 UNPURE are a legendary Black / Thrash / Speed Metal band from Sweden, active since 1991 and a real totem of the genre together with bands such as DESASTER, AURA NOIR and NIFELHEIM. Here we have a full length compilation including 13 songs with two unreleased tracks and classic material, tracing the 30 years discography of the band. The album was released by the Swedish label Nigredo Records. The style is aggressive and groovy Black / Thrash / Speed Metal in the purest UNPURE tradition. If you’re not familiar with UNPURE, imagine a mixture of early BATHORY, the thrashier albums of VENOM, HELLHAMMER, early CELTIC FROST and the first wave of Swedish Death Metal. The D-Beat tempos are abused, but there’s a good amount of European style blastbeats and double bass too. The guitars sound killer: very thrashy, groovy and with a rusty razor-like production. Unfortunately this band is pretty underrated in the underground, although recently there’s a revival of the genre with bands like DEATHHAMMER, for example. UNPURE’s sound is for old school Metal maniacs who don’t give a shit about originality, innovations and trendy Metal. UNPURE plays old school reactionary Black / Thrash / Speed Metal and this compilation is recommended for everyone who likes the thrashier side of Black Metal: headbanging included. www.facebook.com/profile.php?id=100063239587640, www.facebook.com/nigredorecords