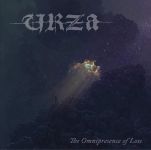 With URZA from Berlin, we have some brand new stuff from the blooming German extreme Metal underground. “The Omnipresence Of Loss” is their first album, nearly four years after their formation in 2015 and a digital single of the song ‘Path Of Tombs’ which also appears on the album. Even though the band itself is rather new, most of the members are experienced, having played in various Death and Doom Metal bands before. As I mention Death and Doom, we have the cornerstones of the sound of URZA. Yet they are not a ”simple” Doom Death outfit, they took the next step into complete desolation. Funeral Doom Death Metal might sound a bit complicated, yet this term is the best way to describe what URZA is all about. This means not only the extreme heaviness of down tuned guitars in combination with an incredibly slow beat, but also the ability to add some devastatingly beautiful guitar harmonies to create a sublime monolithic sound. From the first crushing riffs of the fantastic 17 minutes opener ‘Lost In Decline’ to the very end, “The Omnipresence Of Loss” is an absolutely overwhelming album, full of dark emptiness and complete desperation. All of the five long songs should please anybody who doesn’t mind having time to cook a whole meal in between two beats. Imagine how much it pleases me as one of those guys who either digs the finest Death and atmospheric Black Metal. To prove me right (or wrong), visit www.facebook.com/urzadoom or www.solitude-prod.com