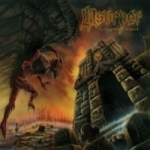 It seems like one of these tracks has turned into one of these slogans that somebody just can’t interpret, but simply has to live for word by word. I doubt that it is USURPER’s meaning behind the track, but some were recently killed, and maybe they were killed for Metal, for all that I know. It doesn’t help much when ‘Kill For Metal’ doesn’t have anything else than a refrain, it’s not going to be an ultimate Metal anthem in my book. I would rather go for the following track ‘Conquest Of The Grotesque’, which has more than a refrain to offer, being a rather varied and diverse track. In a way it seems like USURPER didn’t know what to do the first three tracks. They just continued from their former album(s), and played it safe. By all means, if you’re a fan, you’re of course going to like just that. I prefer a tad variation and more than an anthem or two. So, the mentioned ‘Conquest…’ and especially ‘Return Of The Werewolf’ has some great hooks. The break in the latter is amazing. However, when all is said and done “Cryptobeast” is nothing but yet another USURPER album, and I doubt they will get any new fans, nor will they loose their recent fans. A change in the vocals doesn’t do much difference, at least not to me. So, have a great time and listen to old school Death Metal without much of a difference. Just decent craftsmanship, nothing more, nothing less. That unfortunately doesn’t have anything to offer me personally.