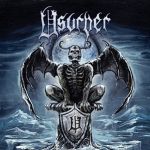 USURPER from Chicago are already around since 1993 and after a longer break they started being active again in 2015. The result of the new start is their already sixth album "Lords Of The Permafrost“ which gets released by Soulseller Records. Apart from their name, I totally missed out on the band before so I checked their new album without any expectations of the musical direction. The opening track ‘Skull Splitter’ is a really cool mixture of 80s Death / Thrash Metal. Kept pretty simple but very cool as the guitars are damn groovy with a crusty edge and a solid Death Metal fundament. The sound is very raw but benefits from the clear and powerful production. The next small highlight is ‘Beyond The Walls Of Ice’ which is damn good Death’n’Roll with sharp guitars and a pretty cool rhythm section. Also the vocals get varied here by some clear choruses. The title track ‘Lords Of The Permafrost’ comes up with classic Death Metal guitars similar to the good old BOLT THROWER tunes and convinces with its groove and the incorporated classic Heavy Metal tunes and its technical edge at the end. ‘Cemetary Wolf’ is another bone crushing groove monster. Again a good mixture between Death and Thrash in the midtempo section before kicking some serious ass at the end. The guys definitely wrote a good album here which lives from their musical experience, good sense for song structures and groovy but technical songs. This album is definitely not the most brutal one but its raw old school vibe somehow really caught me and it was a good variety to the huge amount of HM-2 releases nowadays. Fans of MASTER and other old school farts (like me) should check this album out. More info can be found here: www.facebook.com/usurper.chicago, www.soulsellerrecords.com