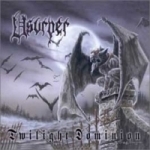 It didn’t really take Chicago’s death squad USURPER very long to get their name out in the underground after the release of their classic “Visions From The Gods” demo back in 1994. In those days they happened to be lucky enough getting picked up by Metalion’s small, yet very fine cult label Head Not Found, released their debut album “Diabolosis” with them and then the whole situation already kind of snowballed. Necropolis Records took over and besides playing several important live shows, the band put out another four releases (a mini CD, one compilation and two regular full lengths). All of them not only gained them a lot of positive feedback from magazines and fanzines alike, but also many die hard fans worldwide. Last year the guys finally ended up signing a new deal with Earache Records who first of all re-issued the “Visions From The Gods” compilation and “Necronemesis” album in order to give those records a bigger exposure, especially overhere in Europe, where they were pretty difficult to find, originally. So, “Twilight Dominion” is the band’s first real album for Earache and in my opinion definitely their best to date! The old USURPER trademarks are still very much present (especially when it comes to the charismatic vocals), but due to a way better production (courtesy of top producer Neil Kernon, who already had worked with Judas Priest, Queensryche or Cannibal Corpse in the past) the band sounds a lot heavier and more crushing than ever before! “Twilight Dominion” basically lives of its killer riffing, which dominates the entire record and unlike in the past, not only focuses on a CELTIC FROST way of writing. Everything has become way more intense now and varies between slow, ultra heavy and devastating faster stuff, somewhere in SLAYER / BOLT THROWER dimensions, without betraying their own musical roots too much. To me this record is the living proof that USURPER have not only matured quite a lot as songwriters, they furthermore created another Metal anthem (‘Metal Lust’) and finally found a producer who was able to get their vision out in the best possible way. Brilliant!