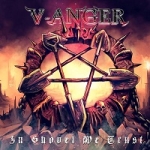 They have a little Italy in New York, placed in Manhattan. So, how much NYHC has emerged from there? Probably not much, though I doubt they have a little New York in Milano, Italy, even though the guys in V-ANGER are quite fond of New York Hardcore, as well as the "Arise" and "Chaos AD" era SEPULTURA. That said, you might have guessed that we are in for an aggressive and intense portion of Hardcore, with a thrashy edge with a lot of groove added. I like Hardcore, the energy and intensity in it is always great to get things going and getting the energy level up. Energy is a key word when doing such music, and the Italians do showcase a great deal of energy, and it isn’t easy not to become recharged when listening to "In Shovel We Trust". Besides sounding a bit like SEPULTURA here and there, just take a listen to ‘Soldiers Of Pain’ for one, the guys have also included a cover version of ‘Biotech Is Godzilla’ from the Brazilians "Chaos AD" record, and they do that tune, as it is done. Do you miss the groovy fierceness of start to mid 90s SEPULTURA or a bit thrashed up version of good old NYHC, then V-ANGER is the band to turn to, as they are getting most of their inspiration from the mentioned, mashing it up into a groove-ridden monster of intensity. There isn’t many new tricks in this bag, but a solid punch to the chin and now get that circlepit going! More info at: www.facebook.com/vangerita, www.sliptrickrecords.com