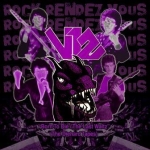 V12 from Portugal are those kind of bands that were over too quick even if they were in for bigger things. This compilation includes all of their works from the 80s just excluding their only studio album. The first CD compromises of the first era of the band with their first vocalist. Music wise V12 is between early Speed Metal and Heavy Rock. Their first vocalist sounds a bit rougher and more aggressive, thus maybe it is because of the also raw rehearsal and live recordings presented in here. Yet, their style almost mantains the same through all the songs. If I had to mention a similar band, I would say later RIOT will be a good reference. There is also a lot of IRON MAIDEN and HELLOWEEN touches here and there and sometimes due to the epic essence they reach I can also say that MANOWAR comes to mind. The second CD is a live show with the vocalist (who has a more softer voice although probably suiting the band better) that recorded their only full length, the self-titled V12 and besides having a very good quality, and having a good local following nowadays only collectors of rare Heavy Metal bands remembers them. I will suggest for the people to try to get their debut album, which if I am not wrong was released by a big label in their native Portugal, to experience a very good band that has a strong Speed Metal sound whilst not letting away the catchiness of the heaviest Hardrock. This compilation will serve as as an introduction to a band that could be better, but due to fate or maybe just bad luck and probably due to singing in their native language, are no more but have an interesting legacy. For all additional information check out the label sites:  www.metalsoldiersrecords.com, www.bloodandironrecords.com, www.guardiansofmetalrecords.webs.com