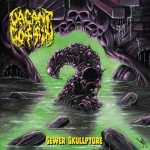 There was a YouTube channel run by a producer of kitchen mixers, and different things (iPhone, Justin Bieber CDs) were put in the mixer and on each episode the opening question was "Will it blend?". When it comes to re-releases, my question is always "Is it worth it?". In this case, straightforward yes. VACANT COFFIN from Finland released, besides a demo, only one album back in 2008. Although the status of the band is on hold, there were no furthermore activities. This is kind of sad, because the quality of the music can easily keep up with the more established bands in that genre. What genre? Grindcore influenced Death Metal, especially names like EXHUMED, NECRONY or early CARCASS came to my mind. The style on "Sewer Skullpture" can be described with the following formula: mixing Death Metal riffs with Grindcore like drum work and rhythms. This album is simply a revelation for all people into that kind of Death Metal. Maybe it is due to the geographical neighborhood, the band uses lots of Swedish Death Metal riffs, those a little bit melodic riffs which made ENTOMBED and DISMEMBER famous back in the late eighties / early nineties. Regarding the playing time, all songs, except the opener, are rather short with each song clicking between one and two minutes. One or another may judge the gargling vocals one-dimensional and I agree, a bit more versatile would have been nice. On this re-release the "The Thrashed Supper" demo with a playing time of ten minutes is added and regarding the quality you will not find any differences. Maybe it is because all eight demo songs made their way to the band’s debut. This 2019 reissue comes with completely new artwork, although the original artwork was not really that awful. All people who missed this album in 2008 (like me), get the chance and grab "Sewer Skullpture". More VACANT COFFIN information can be found here www.facebook.com/vacantcoffinfinland, label contact: www.selfmadegod.com.