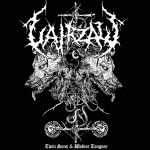 After 2 demo tapes, 2 splits, 3 EPs and a debut album released in 2009, Australia’s own VAHRZAW delivers their sophomore album, courtesy of Crawling Chaos Productions. And I firmly believe that it has been worth the 4 year wait. Up to this day, the land down under keeps up with excellent bands and releases and VAHRZAW is no exception. Their excellent blend of Death and Black Metal spans well over each genre, without loosing identity. Although this time, most of the songs could be tagged as more Black Metal oriented music. But that doesn’t mean that there isn’t also a lot of Death Metal, namely the pounding rhythm section and some slow and heavy parts with a lot of groove. Vocalist George van Doorn’s manages to mix his signature mid-pitched grunts with deep growls and some whispered snarls to add variety. Drummer Brandon Gawith provides a solid performance, either blasting away or slowing down when the music requires it. And Scott Williams’ guitar and bass parts span between eerie melodies, heavy, solid riffing and up to some pretty tight Thrash Metal moments. The combination of styles makes up an album that never lets you down. A well balanced, tight mix fits the music perfectly. Maybe the kick drums are a little muffled for my taste, but everything else sounds sharp. Surprisingly the bass guitar is really present in the mix, which adds character to the heavy parts. The guitar tone is raw, but crisp enough to bear both, the heavy chugs and fast tremolo riffs. The lead guitar tone is out and open. It actually reminded me of some of the early NWOSDM bands. Conclusion: get this album! It features some of the best blackened Death Metal albums I’ve heard recently. Match that with the same obscure aura and savagery from fellow Australians PORTAL and CORPSE MOLESTATION and you have one hell of an album! Contact the band here: www.facebook.com/vahrzaw, www.reverbnation.com/vahrzaw. And their label here: www.crawlingchaosproductions.com, www.facebook.com/crawlingchaosproductions