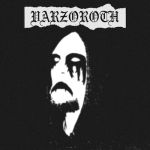 If there would be a competition awarding the shortest review of the year I would have written something like “Take a look at the cover” – over and out! But since there is no such a competition some more words need to be spend. After taking a first look, totally unexpected, Black Metal was blaring out of my speakers. Ok, irony off. Much has been said and written about the black and white faces used in this genre, the origins and varieties. The four songs on this demo are so generic and exemplary for Scandinavian Black Metal of the early 1990s that is pure joy (if this word is allowed within the grim and misanthropic context) for every die hard fan. Even the typeface hints to Black Metal, although it is not the same BURZUM used because the serifs are different. VARZOROTH is a one man outfit from Germany and the present demo, as the title suggests, is the first output. Originally released on tape, now published by Morbid Chapel Records on CD (limited to 500 copies). Rude, minimalistic with a massive dead and darkening sound the music comes along. I like about the first three tracks that they are not only fast-forwarded but slowing down from time to time and thereby creating this special gloomy atmosphere making the whole affair sounding like directly from the grave. Supported by a vocal performance which makes me unsafe if there are actually lyrics used or just some raspy articulations. The last track ‘Plague Bringer’ is a a synthesizer track, very spooky with some kind of spoken words somewhere in the deep. “Demo I” is not necessarily inventive or impresses by an outburst of creativity. But Black Metal to the maximum. Further information can be found here https://varzoroth.bandcamp.com or here www.facebook.com/morbidchapelrecords.