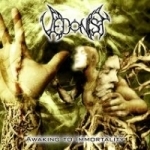 This young Death Metal band from Poland comes up with surprisingly good songs: rather old school but pretty fast and brutal – typically Polish, I’d say. A good amount of – sometimes traditionally melodic, sometimes weird – harmonies (check out the traditional solo part in ‘Self-Created Martyr’) so it doesn’t ask too much of a rather old fart like me. In addition to the sometimes considerable speed of this album, these guys occasionally come up with breathtakingly technical breaks but, luckily, they don’t forget to serve the song and don’t go wanking all over the place. This album has everything a fan of (Polish) Death Metal can ask for (including a good production), so there’s only one slight thing I have to point out: for my taste the singer sounds much too limited and therefore boring, almost nerve wrecking. It’s this "brutal Death" style without becoming froggy. Definitely not my cup of tea. But apart from that: highly interesting release. Check out their website at www.vedonist.metal.pl