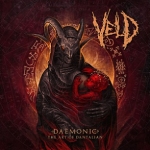 VELD are a pleasant surprise. From 1995 – 2001 the outfit from Poland and Belarus was known as V.E.L.D. but with their debut they abbreviated to VELD. "Daemonic: The Art Of Dantalian" is just album number four, not that much for a time of 23 years, but that should not prejudice the quality of the ten songs, including three instrumentals. Most tracks are pretty much like BEHEMOTH, close to a copycat of albums like "Demigod". Brutal vocals, high-speed riffing and soloing plus blast-beats all the way. If you still not have enough of that blend of Death Metal you are going to like it, because the songwriting is well-crafted and the instrumental skills are top-notch. The last two songs are a little bit different. ‘Love – Anguish – Hate’ surprises with heavy synthesizer / industrial parts. At first I was little confused, but it is just for that song and is not taking to much place. The last and with more than eight minutes longest song ‘Annihilation Of Divinity (Trust Upon Ignorance)’ left me dazzled because of the distorted male and clear female vocals, creating some kind of CRADLE OF FILTH atmosphere. Still I am not sure either to like it or not. To sum it up, VELD are playing modern Death Metal with a clear and forceful sound, nothing rotten from the grave here. So old school freaks may give this album a wide berth. All further info at:  www.facebook.com/veldmetal, www.everlastingspew.com