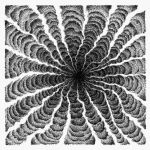 Perhaps you remember SONNE ADAM, a band from Israel, which released a remarkable debut called “Transformation” back in 2011 and two EPs one year later. Since the band is currently on hold, three members decided to form VENOMOUS SKELETON. A first demo was spawned four years ago and now the trio is launching their debut full-length. Having this context in mind, it is a comprehensible reason to draw a comparison. First of all the affinity towards black and white artwork does not have changed. Lyrically occult and mystical themes are still present and the music is still a mixture of Death and Doom Metal. So the corporate principle ‘We Who Worship The Black’ (opener of “Transformation”) is still valid. If you have a preference for SONNE ADAM you can straightforwardly buy “Drowning In Circles”. The music, both of SONNE ADAM and VENOMOUS SKELETON, can be described as ASPHYX trying to sound like very early PARADISE LOST plus very early SAMAEL and additionally Trey Azagthoth is contributing a few archetypical MORBID ANGEL riffs. At some moments influences of GRAVE MIASMA, TRIUMVIR FOUL and TEITANBLOOD flare up. Definitely no light cuisine, and it takes some time to get used to “Drowning In Circles”, but the listener will be rewarded by some fine piece of exceptional Death Metal. Visit www.facebook.com/venomousskeleton or www.everlastingspew.com for more information.