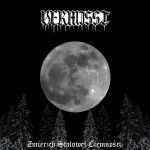 VERMISST is a very young Black Metal band from Poznan (Poland), a trio that, despite being formed only in 2018, has already released two demo tapes, a split and an EP. “Zmierzch Stalowej Ciemnosci” is their last effort, an EP released in January 2020 by the Polish label Fallen Temple both in digital and CD format. Here we have five tracks for almost 25 minutes of old school and raw Black Metal in the vein of the traditional Norwegian and Polish bands from the early ’90s. This EP is a very solid example of cold, grim and dark Black Metal with a very primitive sound and an obscure atmosphere. In total the EP consists of three Black Metal songs and two Dark Ambient instrumental tracks. The intro and the outro are very reminiscent of BURZUM’s Ambient works and are able to create a misanthropic and depressive atmosphere. The best part of the EP are clearly the songs: a minimalist assault of unpolished Black Metal, enriched by some interesting keyboards too. And make no mistake: the keys don’t add any symphonic feel to the wall of noise created by VERMISST, on the contrary they blend naturally in the primitive aura created by the extremely harsh and heavily distorted guitar sound. Like in all these recordings with an ultra raw sound the mixing can be a problem for the listeners, especially regarding the drums. “Zmierzch Stalowej Ciemnosci” offers a distant drumming in the mix with some pretty loud cymbals, whereas the snare, the bass drum and the toms are at times imperceptible. But you know, this is the trademark of the European Black Metal from the early ’90s. The vocals are in line with this kind of genre: raspy, agonizing and freezing screamings from an haunted forest. If I had to compare VERMISST to some known bands, I would say that they sound like very early GRAVELAND and BEHEMOTH, as well as the first demos from the Norwegian scene (BURZUM, IMMORTAL, SATYRICON, EMPEROR, ILDJARN, TROLL etc). Not very much to say about the concept, because I don’t speak Polish, but, seeing the cover art, I can imagine that it deals with darkness and evilness. In conclusion, if you’re into cold, raw and orthodox Black Metal without compromises, this EP is a killer addition to your collection. Get it here: www.fallentemple.pl