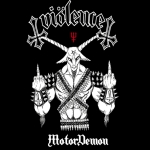 VIÖLENCE is an Australian’ blackened Speed Metal project, which is solely lead by Dylan Potter (all instruments). “MotorDemon”, their debut EP, was initially released independently in January 2018; later Iron Fist Production released this on CD and vinyl format too. This one man wrecking crew from the wastelands of Oceania with the motto of "Loud, Fast, and Rude", seems to have shown up from out of nowhere! While it’s their only EP, "MotorDemon" is more than enough proof that Dylan Potter knows how to bring the dead back to life! Without missing a second, VIÖLENCE throws at you wave after wave of menacing and filthy riffs that will once sound like classic VENOM and the next like (early) SODOM! In addition to the godfathers, VIÖLENCE seems to pay homage to the underground side of the NWOBHM scene and quite obviously to Lemmy Kilmister and his band, like a darker and dirtier cross between "Overkill" and "Orgasmastron". Initiated with ‘Ritual Of The Goat’, which is a straightforward cut to the core where the bass is amplified and playing above the guitar. The seminal influence of DISCHARGE, MOTÖRHEAD and MIDNIGHT is all over the place here. ‘Chained Up’ appeared as a steady onslaught of riffs and drums, where Potter’s vocals hold up just well. The third track, ‘LSD (Leather, Sex, Death)’, will feel like a deadly combo of a little MOTÖRHEAD and a little VENOM; which combusted the whole EP on its own. MOTÖRHEAD, VENOM, BATHORY and HELLHAMMER all precisely appeared as great influence of this theme. ‘Wörship At Midnight’, the longest track on the EP (almost six minutes), is a worthy offering to the Metal gods. Here, Potter shows off his fairly impressive guitar work as well as his abilities on the drums. The same theme gives us a clue, completely influenced by MIDNIGHT and his basic but resounding idea of ​​Black / Speed Metal. The title track, “MotorDemon,” that closes the EP (unless you own the vinyl), is a double-fisted threat which starts with the revving of a motorcycle, surely spirited by the classic tradition and here that does not disappoint. This song will stay in your rotation longer than you could imagine. ‘Lords Of Sleaze’, which is only available as an extra bonus track for vinyl editions, is a final feast of filthy, thrashy, Heavy Metal that could only be produced by someone brought up on a diet of MOTÖRHEAD and VENOM, definitely a worthy bonus for all the vinyl enthusiasts. Black / Speed Metal is a musical subgenre very exploited in recent times, simply a revival without contributing anything new. But this Australian individual project encapsulated passion and personality in “MotorDemon”, which makes this EP a total hell of a ride into the glorious past . Explore more about the band at www.facebook.com/violence6666 and visit their label page www.facebook.com/ironfistproductions1.