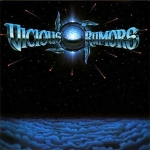 The self-titled album was the third full length release in the discography of this California based Power Metal squad, and featured the great Carl Albert on vocals. 1990 (and basically the early ’90s) wasn’t a very good year for traditional Metal, so this really well sounding and really well produced LP seems to be a bit out of the place, and could easily wear the "Classic ’80s Metal" stamp. Hard to say why many fans of the genre ignore this release, as the truth is it’s not only one of the best VICIOUS RUMORS releases (let’s face it, all early VICIOUS RUMORS releases are great), but also an album which you can put in one line with classic albums of acts such as METAL CHURCH, HELSTAR or LIEGE LORD. Just listen to the amazing ‘On The Edge’ (which I don’t know why reminds me of ‘White Witch’ by SAVATAGE), ‘Hellraiser’, or the opening monster titled ‘Don’t Wait For Me’. This is how US Power Metal should sound! This new reissue doesn’t include any bonus tracks (what’s cool, as it’s better to have no bonus tracks, instead of interviews or shitty sounding live tracks), but has been remastered, and the booklet includes new liner notes written by Malcolm Dome. More information: www.facebook.com/viciousrumorsthisismetal and www.rockcandyrecords.com